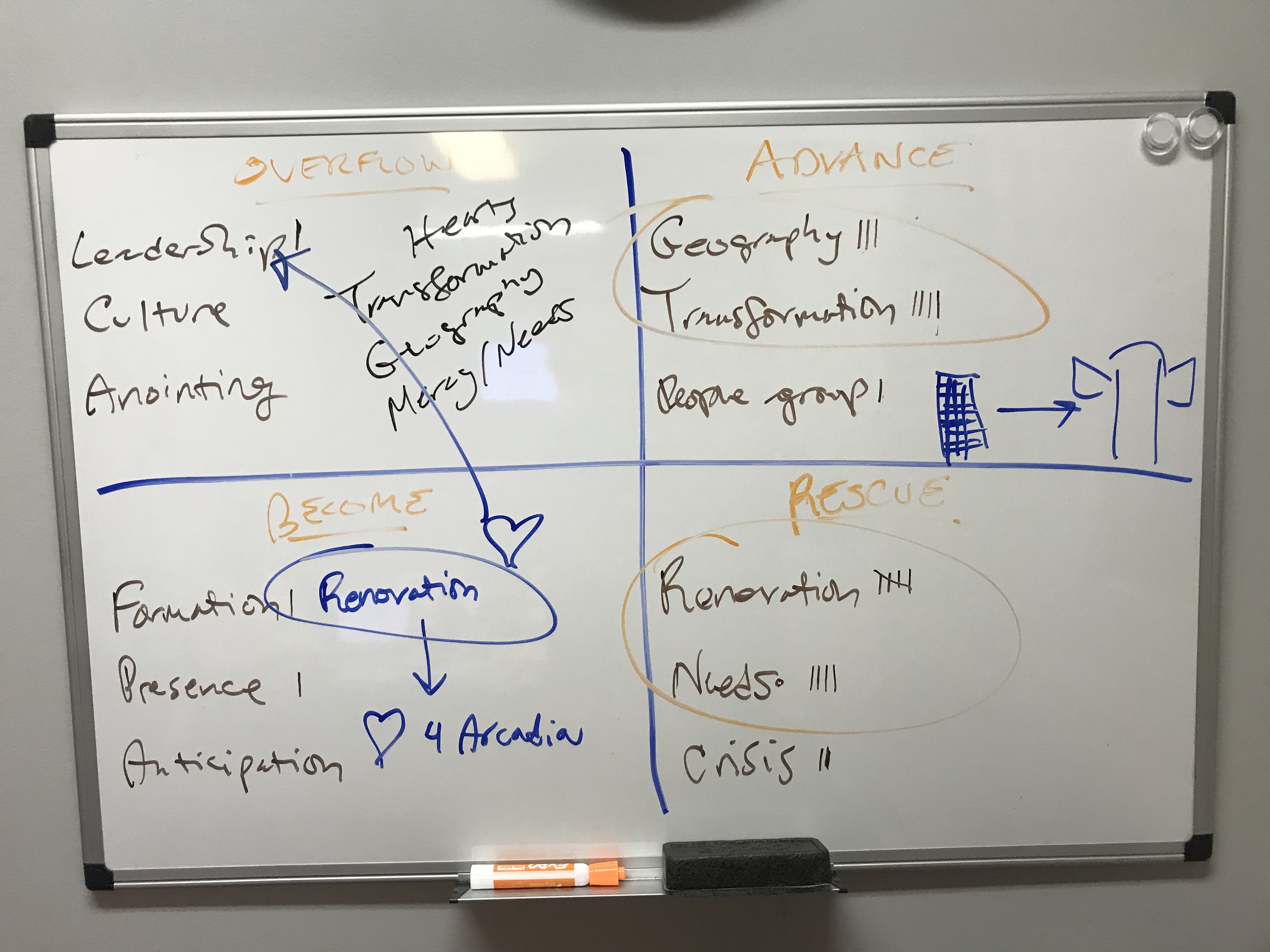 The Heart for Arcadia task force met again on Wednesday, February 19th, to review the twelve vision “templates” from Will Mancini’s book God Dreams and come to agreement on which of the twelve might be most relevant for Trinity to pursue over the next few years.

The twelve templates fall into four categories: vision that advances, rescues, becomes, and overflows. The task force was largely drawn toward templates that fell under the “advance” and “rescue” categories, with Institutional Renovation (rescue) receiving the most support, followed in a tie by Needs Adoption (rescue) and Targeted Transformation (advance), and then Geographical Saturation (advance).

Learn more about each of the twelve templates here.

Pastor led the meeting and began the conversation by sharing an anecdote from the recent Arcadia Township visioning session, in which the 70-80 attendees identified “assets” to the community. Among those mentioned were the Marsh, Arcadia Bluffs, Camp Arcadia, and others. But Pastor noted that no one (other than himself) mentioned Trinity Lutheran Church. He challenged us to imagine what would have to be true so that, if another such meeting were to be held in five years, the first asset that would pop into people’s minds was Trinity.

The discussion then turned to each of the twelve templates, and the task force members’ comments about them. In the course of the discussion of the various templates, three themes especially emerged: geography, transformation, and mercy.

Geography—Though not all members of the task force ranked Geographical Saturation, per se, as one of their most meaningful templates, there was a consensus among the group that we want to focus on our particular place, generally Arcadia Township.

Transformation—A recurring theme in the discussion of several templates was the desire for our congregational culture and mindset to be renewed to active ministry. Gratefully recognizing that we have received many blessings in 138 years, and that God has done much good in and through our congregation, we desire to revive and renew that energy.

Mercy—The third theme that seemed to be interwoven throughout the conversation as we discussed several different templates was mercy: compassionately serving the needs of our neighbors. This theme was especially apparent in the Needs Adoption template, but emerged elsewhere as well. There is a sense that serving our area’s needs is a means toward the end of transformation for both our congregation and our community at large. The task force discussed the need for us to have a posture and mindset toward serving the needs of others.

For their next meeting, the task force will be relating those three themes into one single idea, and begin developing the big picture vision that will serve as the “beyond-the-horizon” goal for the Heart for Arcadia initiative.

Looking for forward to finding out additional from you afterward! Head up for this. And Subway Surfers for fun games.